Sujuk – from Armenia to Lebanon and to the land down under

OK. This is not here just to save face value. I have neglected you. I’m sorry. But hey, I’m back now. Let’s just move on.

I was showing a colleague some blog pix back in December and her comment was: How do you expect people to follow your blog if you haven’t updated in a week… Truth of the matter is, I don’t really expect people to follow my blog. The fact that I have a few visitors each month is taking me continuously by surprise. A recent comment on my blog was chasing me up for a task I had set myself in the first ever post. I obviously have not done any entries on Lebanese breakfasts. But, after a visit to Emma’s on Liberty, I had the chance to get reacquainted with an old favourite: Sujuk. Before I get stuck in, I want to make it clear, this is not a post for the sake of posting. This is the real deal, a full subject matter, so let’s dig in. 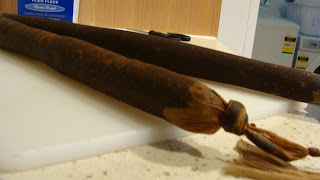 Red Sujuk Stockings, probably great for Christmas, with black Sujuk in the background

Lebanon has a fantastic Armenian community who have enriched our cuisine and with whom we have co-contributed to much cross-cultural osmosis. Our fellow Armenians have had a presence in Lebanon for centuries, but the major influx was during the Ottoman empire’s Armenian genocide in 1915 – a very sad event.

But Armenians are a strong and positive people, and they persevered well, and integrated into the Lebanese society where they now have representatives in the parliament. An area of major concentration is Bourj Hammoud, and there you will find some of the best sujuk ever. 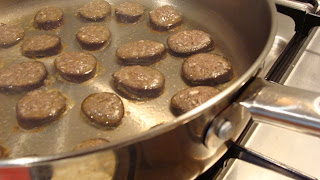 All cut up and frying, with no oil.

So sujuk, it turns out, is a semi-dry, spicy sausage that crosses cultural boundaries. It can be found in more or less similar form in Macedonia, Greece, Serbia, Croatia, Bosnia and Armenia. The version familiar to me is the latter, and after the visit to Emma’s, I wanted more. Emma’s version of this Armenian specialty is pure authenticity. What left me hanging is the mean, upsettingly small portion. 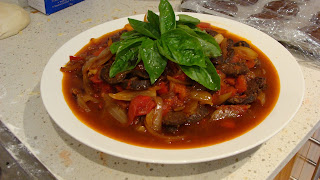 My recipe based on a traditional version with plenty of onions and fresh tomatoes, made smokey by the sujuk slices

Normally, I would seek sausages out at the butcher’s. This particular one however, has an alcoholic ingredient (red wine or arak) which means none of the Lebanese butchers I know would make it, alcohol being a forbidden ingredient by Islam. So, determined to make my own, I looked around the net for resources and found several. So I took the best bits of all the recipes, and came up with my own. It turns out there are two types of sujuk – red and black. Red sujuk contains red wine and has paprika as a main ingredient, which gives it its color. Black sujuk depends on pepper for spice, with the aniseed hit coming from Arak (the macho Lebanese cousin of ouzo or pastis). Beware, you will be stuffing the meat in freshly bought single legged ladies stockings. So here is how you make it:

So, of course, after a week, I had to get everyone over for a sujuk festival. 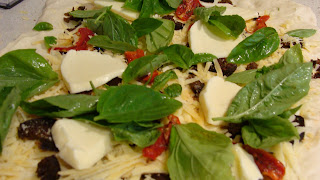 To cook the sujuk, you need only slice it and fry it dry in a frying pan. The amount of fat within is sufficient to fry it nicely.

For the foccaccia, I used a basic recipe with mozzarella, parmesan, semi-dried tomatoes and sujuk.

The following are questions I had in my mind
1- Is this safe? Should I be hanging meat in the garage? A – Yeah, come on!
2- Will it rot? A – You won’t know unless you try. My batch didn’t rot
3- Will it dry up? A – Yep, slightly, and it becomes harder on the outside, which makes it easy to slice
4- Will it drip as it hangs? A – No
5- How do I know if it has gone bad? A – Evidently, it will smell bad, but the alcohol and salt should preserve it well. 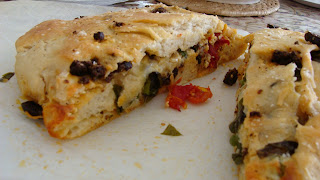 The stuffed foccaccia as an end result.

So, what do I think? Fantastic result, and everyone loved it. None was left over, so that’s cool… I had to buy a few books about sausage making as a result, but that’s another post for another time.