This blog entry is part of a series. Read Part 1 here. 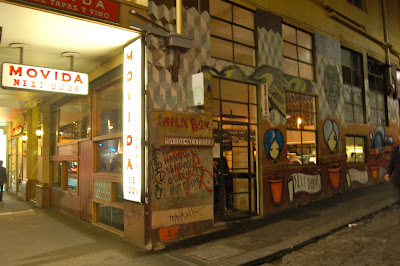 In his recent podcast, Ricky Gervais was discussing the subject of his ideal restaurant with Karl Pilkington and Steve Merchant. Now Ricky is undoubtedly one of the best comedy writers of all time, and I am a big fan of the majority of his work (Fame excluded). From previous podcasts, Ricky was known to be a great lover of cheese, not only fine, but any cheese. So he is obviously not a man to go by when it comes to food. This was driven home to me by his description of the ideal restaurant. To Ricky, that would be a restaurant that is empty, and the food is there once he arrives. He sits down, eats very quickly and walks off, still chewing and says, put it on my bill. Now both Ricky and I agree that Karl Pilkington is a loveable round headed buffoon, but when it comes to the image of an ideal restaurant, we differ greatly. Here is my idea of an ideal restaurant, or at least one scenario of an ideal restaurant, and as you may have guessed, this is the experience you get from Melbourne’s MoVida Next Door. You walk in with no booking and are greeted immediately with a smile, sat at the bar while a table clears, and offered a variety of great wines and beers. You order a drink, and it comes with a complimentary salty treat, perhaps some tasty salted bread, to get your appetite going. The place is noisy, but the people around you are friendly, and are there for the food, talking about it, enjoying it. You love it so much at the bar that you decide you don’t want a table, and prefer to stay at the bar where you have a view of the kitchen, and you notice the chef putting some live yabbies on ice next to the freshest looking prawns and mussels. 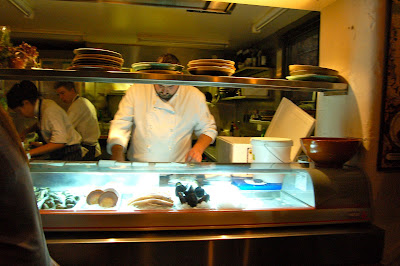 view of MoVida Next Door’s kitchen with the fresh seafood 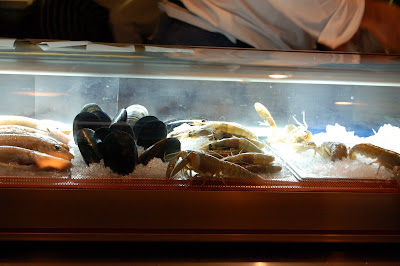 does it get any fresher than alive?

The Spanish beer and the salty bread do their job and you are ready to order, but you can take your time. You don’t need to order all at once. One dish at a time works better, and makes more sense. The waitress behind the bar is more than just a waitress. She is an alert, young lady keeping the whole bar area under control, and she can rattle off the entire menu, including six or so specials, telling you to the last ingredient what goes into them, and all in the cutest Spanish accent. Ask her to say Pedro Ximenez 🙂 Easily waiter of the year award. 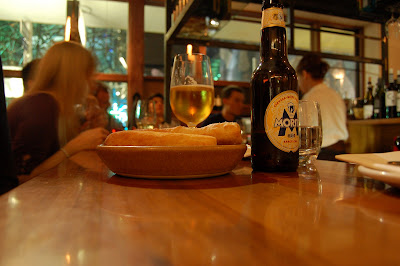 Spanish Moritz beer with salty bread, the salt meant to make you drink more, and it does

In a series of tapas, MoVida Next Door’s first dish of the night is the croqetta, or croquettes of mahon cheese and jamon, crunchy on the outside, and full of cheesy savoury goodness, soft and melty. Mahon is a sharp, hard, cheddar like Spanish cheese made from cow’s milk. It is intensely flavoured and has a fair bit of tartness to it, and when combined with jamon, fireworks. Jamon is offcourse Spanish for ham, and Spanish ham at its best is expressed in the form of Jamon Iberico (ham made from the Iberian pig), of which jamon iberico de bellota is the finest. At that level, the free range pigs are fed a diet purely of acorns for a period before slaughter. The ham is cured for 36 months for an amazing flavour, and if you have not tried it, you have not lived. Even the proud Italians are picking up tips from their Spanish friends and are now further ageing their prosciutto to get some extra depth of flavour. 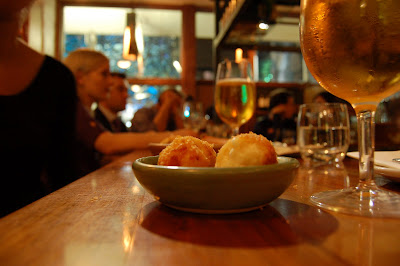 MoVida Next Door’s croqetta of mahon and jamon

We are still hungry, offcourse, and decide to order something else. So next come baby calamari, stuffed with prawns and rice then grilled, their tentacles breaded and deep fried and served with squid ink. The crunchy tentacles are a good textural balance to the creamy rice and soft, yielding flesh. I’ll try to explain how this tasted, but I will never give it justice. The rice had a consistency creamier than a risotto, and a wonderful soft, but not overcooked texture perfectly matching the juicy sweetness of the prawns, and the grilling of the outer flesh gives some caramelisation to the super sea fresh meat, and then the tentacles add the crunchy salty body, and all the flavours are amplified and brought together by the briny ink. Sensational! And it looked beautiful. 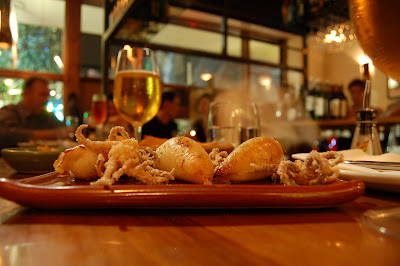 So you see why this place is ideallic. There is no better way to eat food than ordering when you want it, taking your time to savour one dish at a time. And when the friendly waitress tells you that you must have a special of grilled quail legs marinated in Pedro Ximenez (pronounced Heemeneth, the “th” sounds like the beginning of the word “the”) you can’t say no. Pedro Ximenez is a grape that makes the dessert sherry that goes by the same name. The grapes are dried in the sun and turned into a sherry that is dark and sweet, aged through solera, a process that mixes alcohols of different age to yield a complex flavour. The quail legs arrive double skewered, juicy and plump with an aromatic mollasses sweetness, strongly alcoholic and delicious. 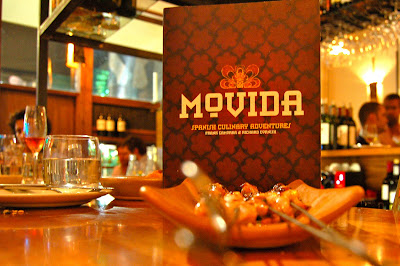 MoVida Next Door’s quail legs marinated in pedro ximenez, the waitress placed it there showing off the MoVida cookbook

Finally, we go with tostadas de bacalao. Bacalao (Spanish) or Bacalhau (Portuguese) is the word for salted cod, which needs rehydration to be used in cooking. Tostada is a popular way of serving food, with a toasted peice of bread or similar with any type of topping. I usually find bacalhau a bit too heavy with salt and being so dry, it also usually absorbs a lot of oil in the cooking process. Unfortunately, MoVida’s version was not as light as I had hoped, with a bit of an oily mouth feel. The flavour is strong and salty and the texture is creamy and contrasts well with the crunchy tostada. I am not sure if I should fault MoVida for the dish, or perhaps I found an ingredient I am not too crazy about. 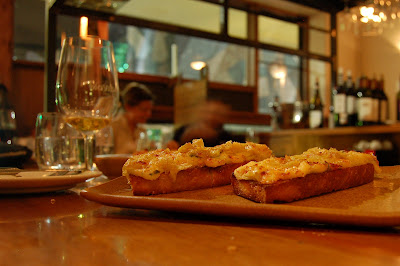 In any case, my trip to MoVida Next Door was a huge success. After returning to Sydney, I was aching for a similar experience and attempted to go to Bodega in Surry Hills in extremely rainy conditions, only to be turned away at the door, as they were full to capacity. Looked too la-di-da anyway! MoVida Next Door has really set the standard for me, so Bodega, watch out, you have had a bad start. If you are in Melbourne, you have to go there and try it for yourself. If the owner reads this and wants to hire, I’m available!